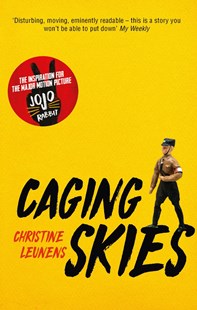 Caging Skies, by Christine Leunens is set in Vienna during World War II, and the story is told from the perspective of Austrian Hitler Youth enthusiast, Johannes.

Johannes’ parents secretly hide a teenage Jewish girl, Elsa in their house without telling Johannes. After a few weeks of observing his parents erratic behaviour, Johannes realises something isn’t right and discovers the girl hiding in a niche (wall cavity) in the spare room of his house.

This book brims with themes and emotions, including Johannes’ mother’s guilt over the loss of their daughter (Johannes sister). This may be one if the reasons why his parents take Elsa in. Then there is the relationship between Johannes and Elsa, which changes as the characters mature and the story progresses. Friendship develops into love, but then obsession, particularly when Johannes' parents both disappear and he is left to support Elsa and his ill grandmother.

As the war progresses, Johannes realises the control he has over Elsa (who remains hidden in the house), especially when it comes to information. So when the war ends, Johannes delays sharing this news with Elsa, for fear of loosing her.

I enjoyed the changing dynamics of the relationships between the characters, as well as the resilience they all displayed in various ways to survive this unimaginable experience.

I listened to the audiobook version of this book, and even though the narrator, Tim Bruce, has a British accent, his pronunciation of German words and names was on-point.

I personally never tire of listening to war stories told from different perspectives, and Caging Skies did not disappoint. The book was also the inspiration for the movie, Jojo Rabbit, which is presented as a black comedy. Directed by and staring Taika Waititi, as well as Sam Rockwell, Scarlett Johansson and Rebel Wilson, I never thought I’d be chuckling along to kids throwing Grenades or Adolf Hilter’s advice offered to young Johannes. But I did, whilst still feeling like the story had been treated respectfully - a mighty challenge for such a sensitive topic.

Selected and read as a book for our book club, we were divided on our thoughts towards Johannes’ character and actions throughout the book. However, we all universally agreed that Caging Skies was beautifully written. Leunens paints paints a vivid picture of life during this period, whilst capturing the character's reactions to daily challenges with compassion. A highly recommended read.

What are you reading at the moment?

Posted by Courtney Symes at 1:19 PM